According to the World Health Organization, iron deficiency is the most common and widespread nutritional disorder in the world in both developing and industrialized countries, affecting over 30% of the world’s population and mainly affecting women of reproductive age. Much of this is due to loss of blood during childbirth and menstruation.  However, malabsorption, viral infections and celiac disease account for some percentage as well.

What is Iron-Deficiency Anemia

Some common symptoms of  iron deficiency anemia include:  a lack of energy or fatigue, shortness of breath, headache, irritability, heart palpitations, dizziness, feelings of coldness, and pale skin.   This is because a body lacking in iron cannot carry oxygen to the cells via hemoglobin.  It also cannot make sufficient ATP, which is our body’s main fuel or energy currency.

How much iron do I need?

Who is at risk for iron-deficiency?

On a whole, vegetarians are at more of a risk for anemia than meat eaters. There are two forms of  dietary iron: heme and non-heme. Heme iron is found in meat, fish, and poultry, and is absorbed very efficiently by the body. Non-heme iron, found in plants such as lentils, beans, molasses, leafy greens, flours, cereals and grains (either naturally occurring or fortified), is not as well absorbed as heme iron.  In fact, only 1% to 7% of the non-heme iron in staples such as rice, black beans, soybeans and wheat is absorbed when consumed as a single food. However, it is not necessary to eat meat to maintain sufficient iron levels as evidenced by many cultures that are predominately vegetarian.

Other populations at risk include those with celiac disease or IBD and women who have heavy menstrual periods or just had a baby.  In that case, please talk to your doctor or a nutritionist for guidance.

What foods can I eat? 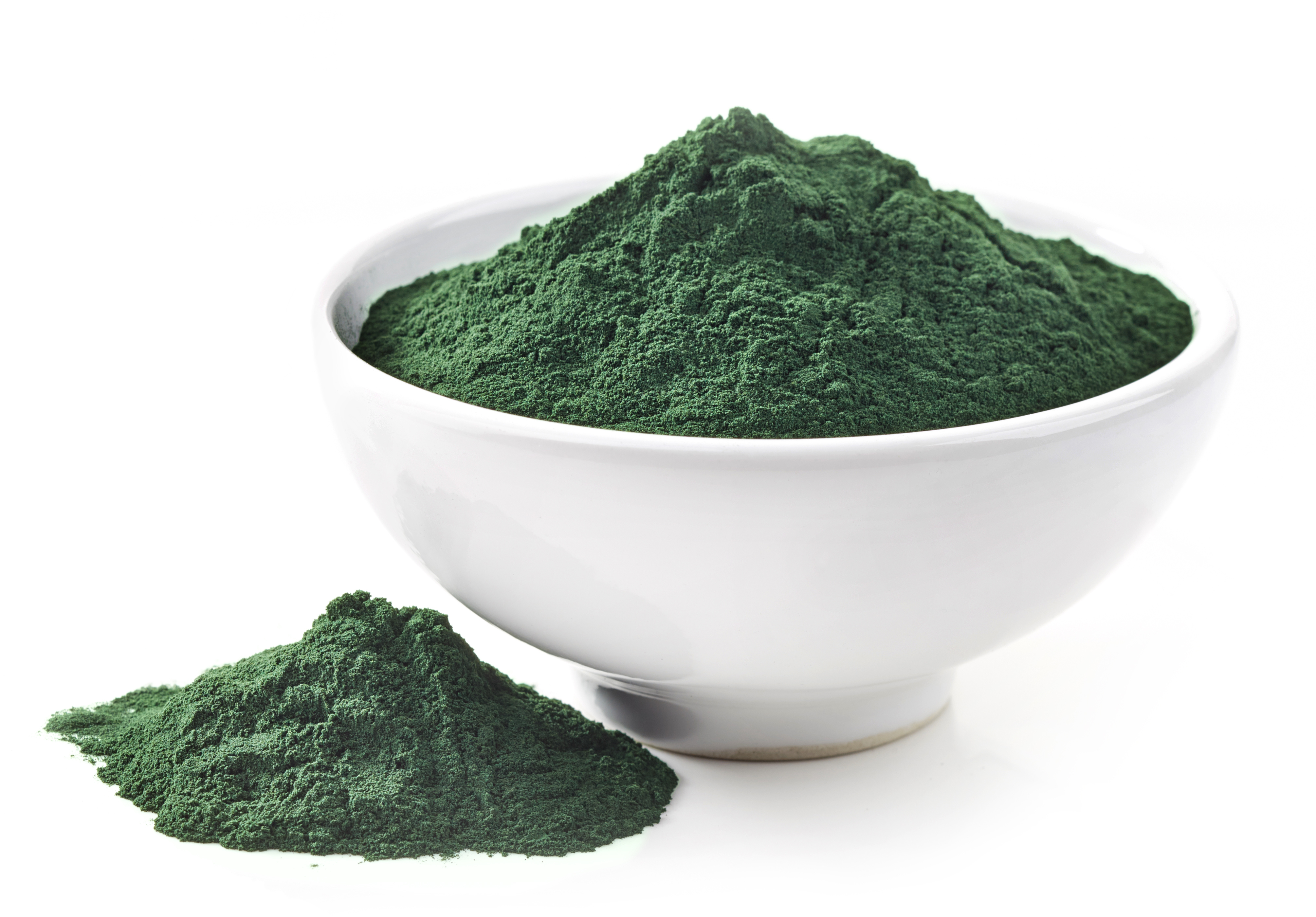 plant foods, the benefits to plants are the antioxidants and polyphenols (fancy words for inflammation fighters) that come with them.  Vegetarian powerhouses for iron include unsulphured dried fruit like peaches or apricots, blackstrap molasses, spirulina, chlorella, spinach and thyme. In fact, adding 2 teaspoons of dried thyme to your soup or salad will provide nearly 20% of your daily iron needs.  Thyme is also delicious as a tea with some honey (and it’s anti-viral too!). 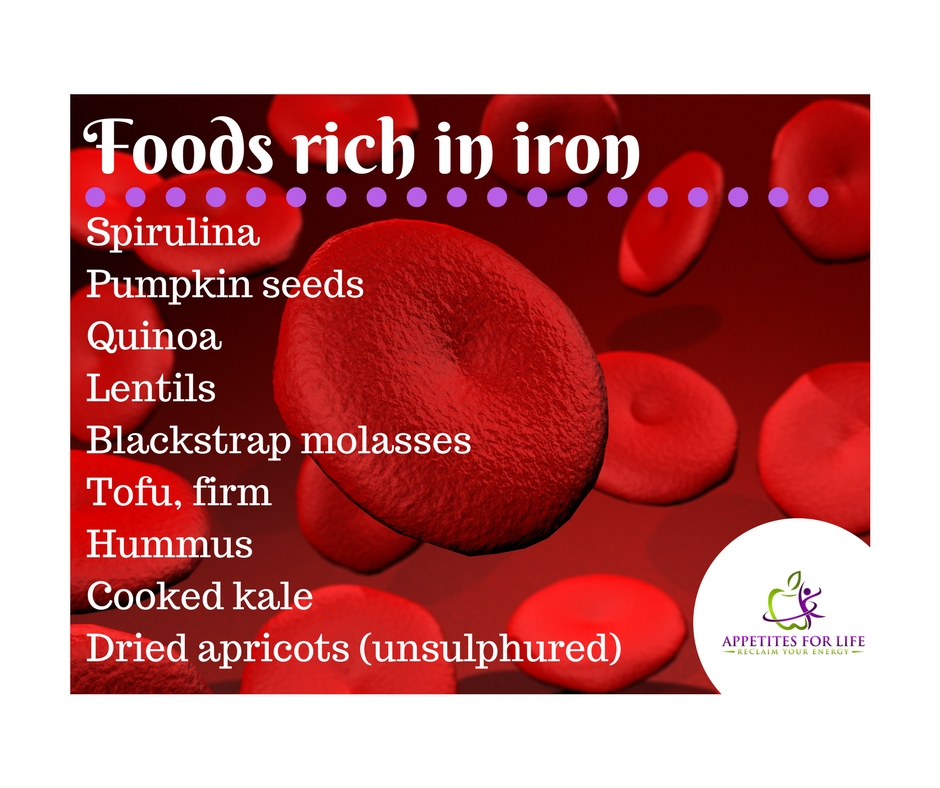 Several food components interfere with iron absorption. Grains and beans contain phytate or phytic acid, which significantly reduces iron absorption. Phytates are considered an anti-nutrient.  This means they actually prevent nutrients from being absorbed in the body, resulting in deficiency. To neutralize phytic acid, soak beans and grains overnight or at least for a few hours in water with acid from either lemon or vinegar. You can also purchase sprouted beans and grains.

Another iron inhibitor is tannins, present in coffee and tea. Drinking coffee, or black and green tea with a meal may not be a good idea if you are seeking to boost iron levels.

If you are eating a diverse, vegetable rich diet and you are still deficient in essential minerals and vitamins, there is likely something going on with your gut. Poor diet, stress, medications, lack of movement. and an imbalance in gut bacteria can all impair digestion. It is imperative to heal your gut in order to absorb and process your nutrients.  Headaches, gas, bloating, belching, and loose watery stools and/or constipation are all indications that something is not working as it should.

Iron deficiency occurs in about 60-80% of patients with inflammatory bowel disease (IBD) (1).   Low stomach acid (HCl) can also be a cause for poor iron absorption. Taking 1 teaspoon of apple cider vinegar in 8 oz. of water before a meal can help balance stomach acid levels.   Bitters (like they put in your cocktails) in a glass of sparkling water also help digestion.  So check your digestion, absorption, and micronutrient levels first to help optimize digestion.

Taking an iron supplement can be helpful in getting over the deficiency hump but should not be taken long term. Once the gut has been healed, it should be fairly easy to maintain normal iron levels with a diverse diet rich in meats, fish, fruits, vegetables, and vegetarian proteins like legumes and beans.

The main takeaway is this: if you feel symptoms of anemia, check with your doctor about a blood test. If you are slightly anemic, start to add in more high iron foods on a daily basis and be aware of the interacting foods. If your doctor recommends a supplement, then this may be the best way to go in the short term, followed by re-evaluation in a few months, and then an iron-rich diet after that.